In 1939, the Durrells returned to London because of WW2. During this time, Gerald Durrell worked in an aquarium, a pet store, on a farm for the war effort, and finally in Whipsnade Zoo as part of a deliberate attempt to gain experience before going on collecting expeditions, which would then allow him to set up his own zoo.

His time at Whipsnade was invaluable, both for his many encounters with various characters (human and not!) and experience gained, but because it showed him some of the downsides of current zoo practices. The book Beasts in My Belfry was written years later, presumably from the copious notes the young Gerry took at every opportunity.

At the age of 21 he received an inheritance allowing him to fund his first collecting expedition, which led to many more trips, covered in the books listed above.

The second story in Fillets of Plaice is set in London, and the essays in The Stationary Ark  also touch on his experiences with Whipsnade Zoo.

Over time, Gerald Durrell became increasingly upset with the quality of zoo care and their lack of conservation effort, and finally decided to establish his own zoo.

His final collecting trip in 1957 was to collect specimens for his new zoo, which would be dedicated to conservation, for learning about species and breeding them, and not simply for ‘show’.

Unfortunately, setting up a new zoo comes with a lot of zoning problems, and he eventually had to look outside of the UK.

By chance and luck, he found and rented Les Augres Manor on the island of Jersey (an island between France and England) and opened his zoo in 1959, along with another collecting expedition to South America.

He established the Jersey Wildlife Preservation Trust in 1963, and the Trust bought the Manor from its owner in 1971. In 1979 his wife divorced him due to his alcoholism and stress, and he married his second wife Lee that same year. Lee was a co-author on many of his later books.

Following Gerald Durrell’s year as an assistant zoo keeper at Whipsnade Zoo at the age of nineteen and twenty, and his first encounters with large and exotic animals. For example: Gnu, Chinese Water deer, lions, tigers, bears (oh my!), tapirs, arctic foxes, polar bears and a giraffe.

Collecting animals for, and starting, his zoo

From Bafut (in the West Cameroons, Africa, his third trip there) to Bournemouth, this book tells the story of Gerald Durrell’s final collecting trip before starting his own zoo, and the difficulty he had finding a place to put all his animals, and keep them alive, on his return to England while he ran around trying to start his zoo.

Setting up and running Jersey Zoo

The story of the trials and tribulations, both animal, community and funding related, of setting up his zoo in a manor house on Jersey Island. Covers many anecdotes of animal characters, an insight into how he went about creating his ideal zoo, the reactions of the local community and the management and money problems that stood in his way.

What makes a good zoo, and their role in conservation

Essays on the state of zoos at the time, what they were like, what Jersey zoo has become, and what a good zoo should be.

Running the zoo and trying to fund the next collecting expedition, as well as that expedition

A collection of disasters and delights from Jersey Zoo, and a collection of expedition anecdotes from Japan to Europe to West Africa in a series of quests for highly endangered species to breed at the zoo. One of his best sellers at the time.

A Final Look At Jersey Zoo 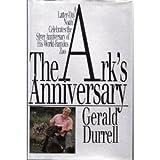 A look back at his adventures with animals, the zoo’s growth and the creation of the Jersey Wildlife Preservation Trust

One of the last books Gerald Durrell published, in 1990, The Ark’s Anniversary provides an overview of his personal history collecting and caring for animals, the growth of Jersey Zoo, and the creation and activities of the Jersey Wildlife Preservation Trust. If you’re interested in more recent books about Jersey Zoo and Durrell’s legacy, scroll down to ‘Books About Gerald Durrell And His Legacy”.